The NEW CRUSADERS have already made their mark on the digital world of comics, reviving the Red Circle heroes for a new generation, but what ever happened to the previous incarnation, The Mighty Crusaders? Comic Book Resources has the exclusive on the upcoming LOST CRUSADE, which serves to fill in the gaps between the teams. 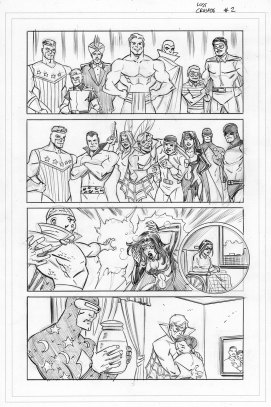 Enter acclaimed writer Chuck Dixon (Batman, Punisher) who will be coming in to tie up loose ends and give The Mighty Crusaders closure. A long-time fan of The Mighty Crusaders, Dixon jumped at the chance to delve into the lost years of these iconic heroes. In describing his take on the upcoming stories, he states, “It tells some back story on the classic Red Circle heroes and shows their connection to the new, younger versions.” Artist Mike Norton will join Dixon on the new regular series of short stories debuting later this year.

To catch up with the NEW CRUSADERS as well as delve into the classic Red Circle library, download the Red Circle App today!