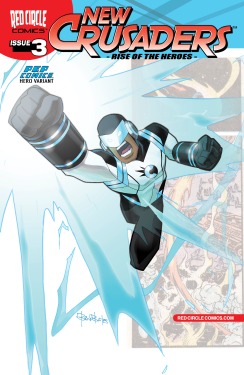 The original Comet was John Dickering, a brilliant chemist who was infused with his phenomenal powers by what should’ve been a fatal accident.  He had quite the storied career as a super hero, fugitive, and savior-king to an alien race!

That’s left some awfully big shoes for his son, Greg, to fill.  It doesn’t matter that he’s adopted: Greg feels an intense sense of obligation to continue his father’s legacy.  Greg’s got a level head and a lot of patience – just the traits he’ll need to control all of his awesome power!