Baltimore Comic Con came and went this past weekend, and Red Circle Comics made quite a splash at the event. Bleeding Cool covered the World of Archie panel–which included Mark Waid, Dean Haspiel and J.M. DeMatteis.

At the panel, Waid and Haspiel discussed The Fox’s “Apocalypse Now and Island of Doctor Moreau influenced storyline,” and Haspiel hinted at a spoiler for the storyline of issue #5. It was also revealed that Haspiel and J.M. DeMatteis have wanted to work together “for years” and that DeMatteis is intent to contribute to ‘building a new Red Circle universe’ in the series.” 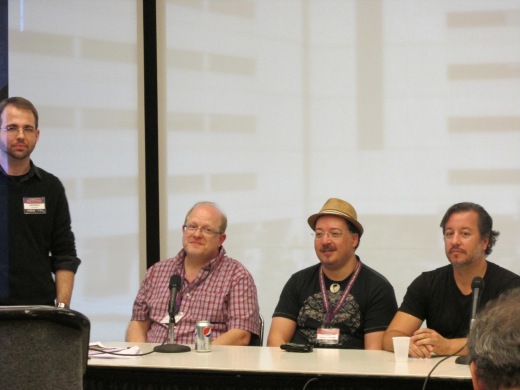 Additionally, the Washington Post interviewed Dean Haspiel on The Fox. Haspiel made mention of his excitement about working on The Fox: “Maybe I finally earned a place at the table where I can have regular fun working on franchise comic books like so many of my peers. I hope to have a long and fruitful relationship collaborating on ideas for The Fox and the future of The Mighty Crusaders, who have the untapped potential to stand proud next to our favorite Marvel and DC characters.”

Also covered during the panel were updates to the much-awaited, upcoming TEEN+ horror series Afterlife With Archie with superstar artist Francesco Francavilla. And as for Archie Comics‘ beloved line: writer Paul Kupperberg discussed all of the exciting and unforgettable upcoming storylines in Life With Archie, writer/artist Dan Parent talked about his GLAAD Media Award-winning series Kevin Keller as well as what’s next with The Archies, and Harvey Award-nominated Most Promising New Talent artist Ryan Jampole discussed what to expect in Mega Man.

The Fox #1 hits comic shops on October 30th. Stay tuned for even more info on the upcoming series in the next few weeks by ‘liking’ the Red Circle Comics Facebook page and following @RedCircleComics on Twitter!