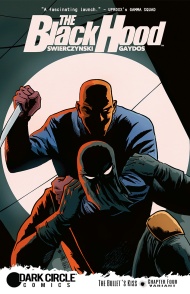 Greg Hettinger has six hours to find Philadelphia’s most secretive drug kingpin – or life as he knows it is over.

Swierczynski and Gaydos take Hettinger to the limit in THE BLACK HOOD #4 as a graveyard encounter leaves him on the run from both the police and criminals alike.

Follow Hettinger as he inches closer to discovering the true identity of the Philadelphia crime lord known as “The Connection,” while his own secrets are in danger of being revealed. Lost in a haze of addiction and near death, the fallen hero cop finds himself at a crossroads: keep his secret and die or reveal himself and live to fight as The Black Hood?

Grab the fourth issue of THE BLACK HOOD at a comic book store near you, available now! Not sure where your nearest comic shop is? Use the Comic Shop Locator Service!

Get THE BLACK HOOD mailed directly to your door with a subscription from Archie Comics!