Dark Circle Comics takes comic shops by storm this Fall with the launch of the action packed superhero thriller THE SHIELD, the urban horror series THE HANGMAN, and the return of the critically-acclaimed crime noir series THE BLACK HOOD!

THE SHIELD #1 Cover by David Williams

Written by Adam Christopher (Elementary: The Ghost Line) and Chuck Wendig (Star Wars: Aftermath) with art by Drew Johnson (Wonder Woman), THE SHIELD #1 re-imagines a classic Golden Age hero for a new generation of readers! Issue #1 hits comic stores and digital platforms on October 21st with the first chapter of “Daughter of the Revolution.”

Since the dawn of the republic, whenever her country faces its blackest days, she returns: a spirit of the revolution sent to fight for what is right. But when she reappears for the first time in a generation with no memories—not even of her own identity—and encounters an evil force expecting her arrival, all the Shield can do is… run!
Script by Adam Christopher and Chuck Wendig
Artwork by Drew Johnson, Rachel Deering, Kelly Fitzpatrick
Cover by David Williams
Variant Covers by Wilfredo Torres, Andrew Robinson, Rafael Albuquerque, Robert Hack
On Sale Date: 10/21
32-page, full color comic
$3.99 U.S.

To purchase THE SHIELD at a comic book store near you, use the Comic Shop Locator service.

THE SHIELD is also available on digital devices via Comixology.

THE HANGMAN #1 Cover by Tim Bradstreet 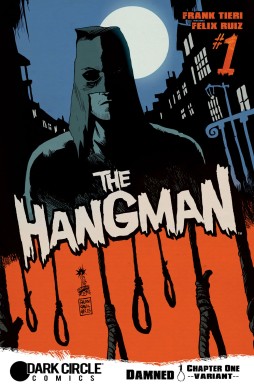 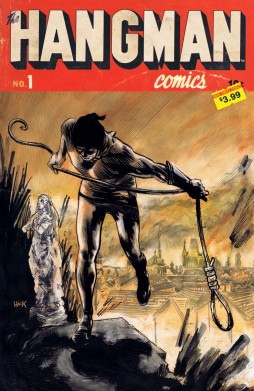 They say the Hangman is nothing more than an urban legend. A spook story told to scare criminals straight. But those who encounter him—like hitman “Mad Dog” Mike Minetta—know different. They know that when he comes for you… you’re dead already. Join fan-favorite writer Frank Tieri (WOLVERINE, BATMAN) and artist extraordinaire Felix Ruiz (WOLVERINE MAX, HALO) for an ongoing tale of horror, the supernatural and violence…  and learn why some men may never be redeemed.
Script by Frank Tieri
Art by Felix Ruiz
Cover by Timothy Bradstreet
Variant Covers by Felix Ruiz, Francesco Francavilla, Robert Hack
On Sale Date: 11/4
32-page, full color comic
$3.99 U.S.

To purchase THE HANGMAN at a comic book store near you, use the Comic Shop Locator service.

THE HANGMAN is also available on digital devices via Comixology. 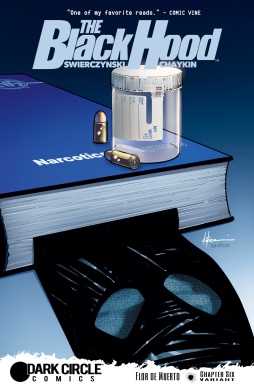 After the soul-crushing events of “Bullet’s Kiss,” disfigured cop Greg Hettinger leaves Philly and checks into a Southern California rehab clinic. But a plane ride can’t separate Greg from his troubles. A fellow patient believes her former drug dealer (and lover) has sent someone to kill her, and it’s up to Greg to figure out which member of their circle is preparing to pull the trigger…

New to the dark, twisted world of The Black Hood? Then check yourself in for this thrilling one-shot from novelist Duane Swierczynski and superstar artist Howard Chaykin.

To purchase Dark Circle Comics at a comic book store near you, use the Comic Shop Locator service.

Dark Circle Comics are also available on your digital devices via Comixology.